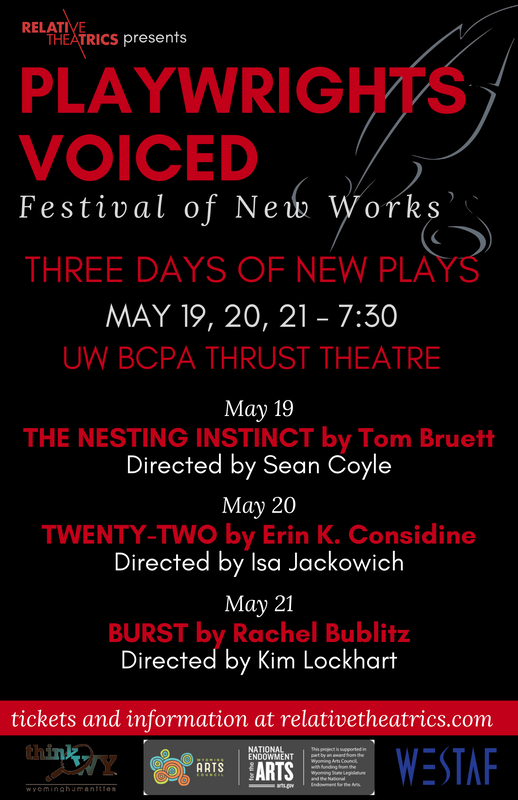 Purchase Tickets!
Relative Theatrics presents the 8th Annual Playwrights Voiced Festival of New Works, May 19-21, 2022, at the UW BCPA Thrust Theatre Theatre. The series features three nights of new plays by developing playwrights and aims to further the artistic growth of contemporary writers and the promotion of local talent by directing and acting.

​Playwrights Voiced is supported in part by grants from WESTAF (the Western States Arts Federation), the Wyoming Arts Council, the National Endowment for the Arts, and the Albany County and City of Laramie Community Partner Funds.

May 19
THE NESTING INSTINCT by Tom Bruett
Directed by Sean Coyle
A brother and sister have conflicting views about what to do with their inherited childhood home that’s built in a flood zone in Florida. A pair of blue-footed boobies wrestle with the power of their instinctual urge to have a chick on an island that is shrinking by the day. Three stories intertwine in surprising ways to explore parenthood, identity and the steadfast power of home in a world that is changing drastically by the minute.
The idea for the play came about as a way to address the human and animal impact of climate change on our planet.  It's all about the joining aspects of the human race and is thought provoking, touching and funny.
Tom Bruett is a Denver based playwright whose work has been produced at La Jolla Playhouse/Blindspot Collective, Atlantic Acting School, PianoFight, SF Fringe, PCSF, ReGroup Theatre, Players’ Theatre and Best of PlayGround 23 and 24. His full-length PlayGround commission, The Nesting Instinct, was read as part of Zoom Fest 2020. He was a finalist for the Humana Festival Heideman Award. As a lyricist he was selected for the Johnny Mercer Songwriting Institute through ASCAP and Northwestern.

May 20
TWENTY-TWO by Erin K. Considine
Directed by Isa Jackowich
We lose 22 soldiers a day to suicide. Twenty-Two: men and women who have fought and survived only to return home broken and abandoned. Twenty-Two is an exploration of one woman and one man, both struggling with the aftermath of this unspeakable choice, and the hope they find in each other.
Discussions involving the truth of war in our country are always risky, relevant, and real. We funnel our young people into the military. We call them heroes. We send them into treacherous, explosive situations they aren't prepared for, that no one could possibly be prepared for, and then we bring them home broken. It takes empathy and honesty to put a human face on the politicized statistic of "Twenty-Two Soldiers committing suicide a day." It necessitates candid discussions about mental health, caretakers, and gun control. This script requires a community that understands the depth of the issues and is willing to raise awareness while working towards a solution.
Erin K. Considine is an emerging Playwright from the Atlanta Area. Highlights include: 2017 & 2020 Ethel Woolson Labs (Atlanta), 2018 Playwrights Voiced Festival (Laramie), 2021 New Year, New Works Festival (Palmbeach), 2021 Headwaters Festival (Creede), 2020 Garry Marshall New Works Festival (Burbank),  and many more. Erin was named a Finalist for the 2019 and 2021 Eugene O’Neill NPC, and she was the Winner of the 2020 Tennessee Williams Festival One Act Play Competition.

May 21
BURST by Rachel Bublitz
Directed by Kim Lockhart
Sarah Boyd is an extraordinary human being. Not only did she build her company from scratch using nothing but willpower and fortitude, she also sits on the precipice of saving this planet. Because on top of being one of the fastest growing tech companies in history, Tactix, with Sarah at its helm, will usher this planet into the post-plastic era. A time where we need not worry or fret over the great destruction being done to our world from this non-biodegradable foe. With her eyes steady on her next round of funding, Sarah must persevere through a late night interview, a lawsuit aimed at a person from her past, and the waffling of her CTO. It's a heavy load, and Sarah knows that she is the only one great enough to bear it.
BURST challenges a lot about how most of us are living today. Not only in consumption and consumerism, but our feelings about women, and our relationship with social media.
Rachel Bublitz is known for telling stories about women, and creating exciting new work for young performers. She received the Will Glickman Award for best premiere play in the Bay Area for the Z Space production of her play RIPPED. Her work has also been produced at the University of Utah (The Night Witches), Barrington Stage Company (My Body), and PlayGround (Funny, Like An Abortion). Rachel now resides in Salt Lake City. When she isn’t writing, she’s watching her kids dominate at water polo.